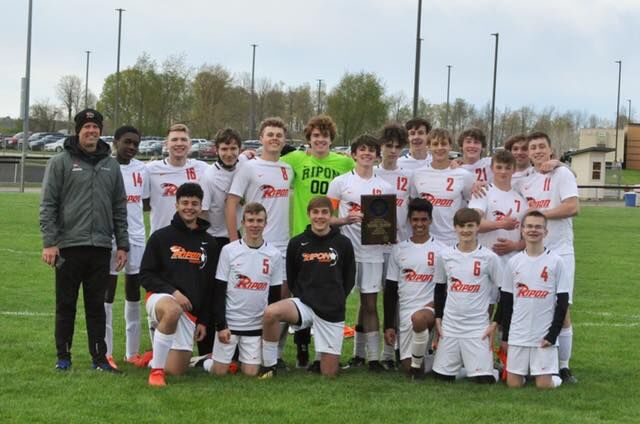 The Ripon High School boys' soccer team gather around the regional plaque after defeating Clintonville 2-1 in a shootout. 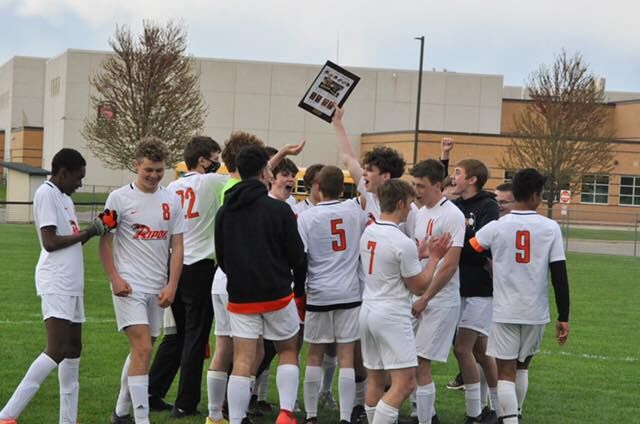 The Ripon High School boys' soccer team celebrates with the regional championship after defeating Clintonville in a sudden death shootout.

Ninety minutes of regulation was not enough to determine the regional champion Thursday. Neither were two 10-minute overtime sessions or five rounds of shootout kicks.

It came down to sudden death penalty kicks, in which the No. 3-seeded Ripon High School boys’ soccer team had the first crack. Junior Jules Messitte, who did not come out for the team his sophomore season, took the kick and beat the goalkeeper, who dove a little too late, to the right side of the goal.

Next up came No. 2-seeded Clintonville’s kick. Needing to score to extend the shootout, the Trucker player kicked the ball and Tiger goalkeeper Liam Gilfillan was able to tip the shot over the goal to give his team the regional championship. It marks the program’s first regional title in its 21-year history.

"It's big for the program,” Ripon head coach Steve Nankervis said of the victory, noting it’s especially sweet as Clintonville defeated the Tigers 1-0 earlier this season. “... These boys can definitely hang their name on this date and claim that they were part of a regional championship team, which has never been done for Ripon soccer — boys or girls — ever."

The game did not get off to a good start for the Tigers, who had won only two playoff games in its program’s history entering the contest (the last being in 2013). They allowed a goal around the 15th minute as a Clintonville player dribble penetrated toward the goal and took advantage of some missed steps and challenges to find a teammate on the far post who was able to basically touch it in from about three yards out. The score remained that way for the remainder of the first half.

"We weren't playing good soccer in the first half,” Nankervis said. “I was definitely in the boys' ear a little bit about their play and what we need to fix in that second half.”

Ripon dug down and got that goal back in the 58th minute, when LeeRoy Cotton found Spencer Schultz on a direct kick. Schultz was able to take the kick and head it over the keeper for the goal.

According to Nankervis, the Tigers had more opportunities than Clintonville to score the go-ahead goal from that point due in part to having better stamina, but were unable to take advantage.

“They were definitely feeling the stamina situation worse than we were. We had lots of opportunities in that second half to finish the game,” Nankervis said, noting Ripon had a couple wide-open shots that it over kicked and missed the goal either over the top or to the sides. “That second half, especially the closing 15, 20 minutes, we were in their kitchen a lot … And then that first overtime, I think it was heavily us and then the second overtime, everyone was feeling [the fatigue].”

In the shootout, Ripon won the coin toss and elected to kick first as Nankervis believes that puts the pressure on the other team. Adam Banerjee took the first shot for Ripon and scored and Clintonville answered. Isaac Whitrock took the second shot and also found the back of the net to set up the Truckers, who missed their second try. Dylan Kamin then made the Tiger’s third kick and Clintonville responded with a goal of their own to stay within 3-2. Ripon then missed its fourth shot, giving the Truckers the opportunity to tie the shootout at four, which they did. Both teams then missed their fifth and final kick of the initial shootout round, forcing sudden death and setting up Messitte’s and Gilfillan’s heroics to bring Ripon its first regional championship in program history.

Nankervis, who noted it’s not really fun for a coach to go into a shootout and it’s very stressful for anyone over the age 18, was pleased with how his kids handled it and said it is a fun experience for them.

“You've got your team cheering for you because all the boys are standing out in the middle of the field as the kicks are happening at the opposite end …,” the Ripon coach said. “And then once Liam was able to get that last shot over the bar, the boys rushed him and did a little bit of celebration and hoot and hollering because they know they just accomplished something that had never been done before in the Ripon soccer program history."

Ripon will look to make more history tomorrow (Saturday) when it travels to Fond du Lac to face Winnebago Lutheran Academy in a sectional semifinal game at the Fond du Lac Soccer Complex. Kick off is set for 11 a.m.

Much like the Clintonville game, the semifinal is a rematch of a contest Ripon lost 1-0 earlier in the season.

"They're probably the best team we faced all year; definitely well-coached, a lot of skill on that team,” Nankervis said. “They beat us on an awesome set piece earlier in the season, so definitely have to watch out for that. It should be a good match. We definitely can compete with them with our athleticism; soccer skill they definitely have the advantage on us there. As long as we just come to play and keep our heads in the game for 90 minutes it should be another good game. Either way, win or lose, I am expecting a good competitive game."

The winner of that game will face the winner of Notre Dame and Sturgeon Bay for the sectional title and the right to go to state tomorrow at 7 p.m. at the Fond du Lac Soccer Complex.