Entering last week Saturday night’s season opener against Augsburg University, the coaching staff of the Ripon College Red Hawk football team didn’t know what type of play it would get from the offensive line.

“Our offensive line has struggled the last few weeks in preseason,” Ripon head coach Ron Ernst said. “We were a little unsure of who was playing and how healthy we were going to be and how good we could potentially become.”

The offensive line answered those questions in resounding fashion as it paved the way for a record-tying performance by freshman running back Connor Ramage in a 46-38 home win over the Auggies.

“Those guys brought their ‘A’ game on Saturday night, and that offensive line did some amazing things,” Ernst said, noting on one touchdown run Ramage basically never got touched because of the blocking.

Ramage was the main recipient of the play up front as he rushed for 226 yards and six touchdowns, which tied a school record, in his first collegiate game. Rosendale native Cormac Madigan, who is a senior this year, set the single-game mark three years ago against Beloit. The 226 rushing yards ranks 10th in a single game in school history. The record is 293 yards, which was set by Don Dawson in 1993 against Knox.

“Connor certainly deserves everything because he got a lot of yards working hard and breaking tackles,” Ernst said. “He’s a young man that if he stays healthy and keeps improving, can have a very good career.” 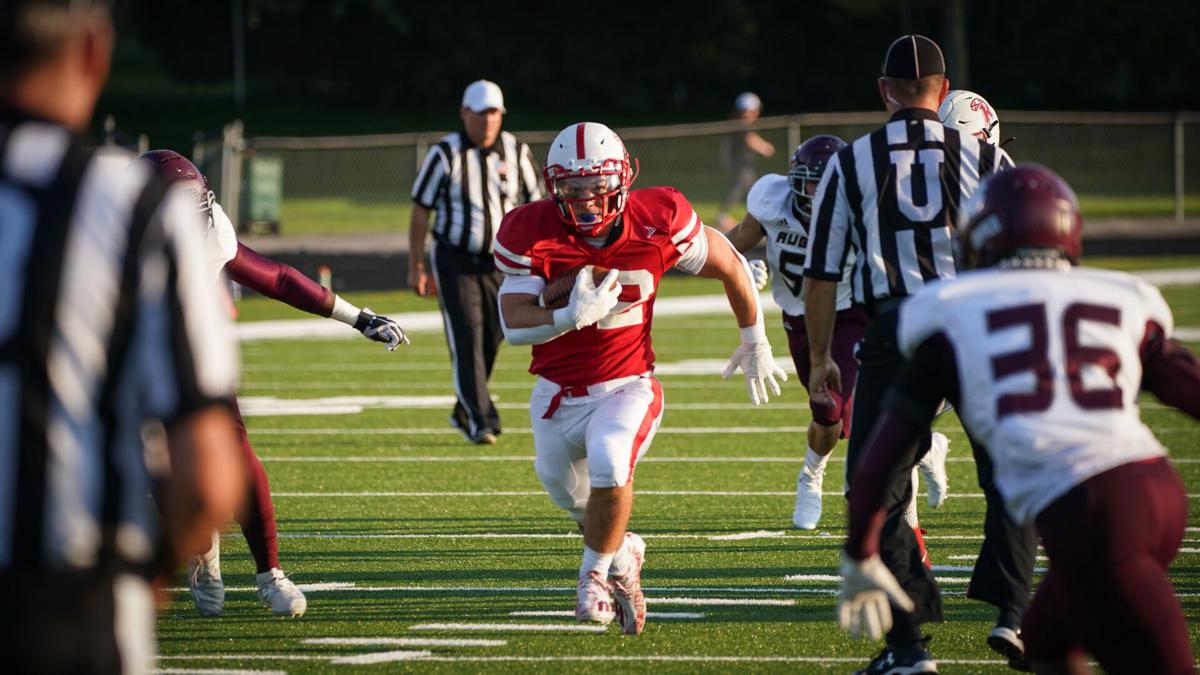 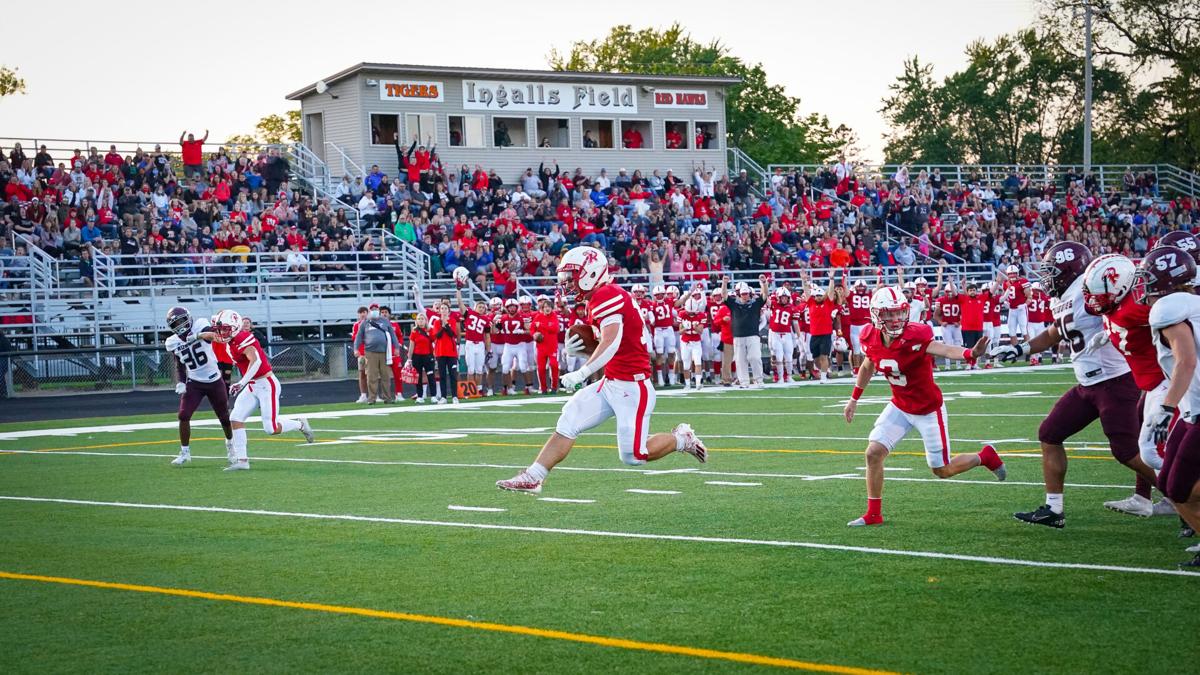 Connor Ramage gallops his way into the end zone for one of his school record-tying six touchdown runs. 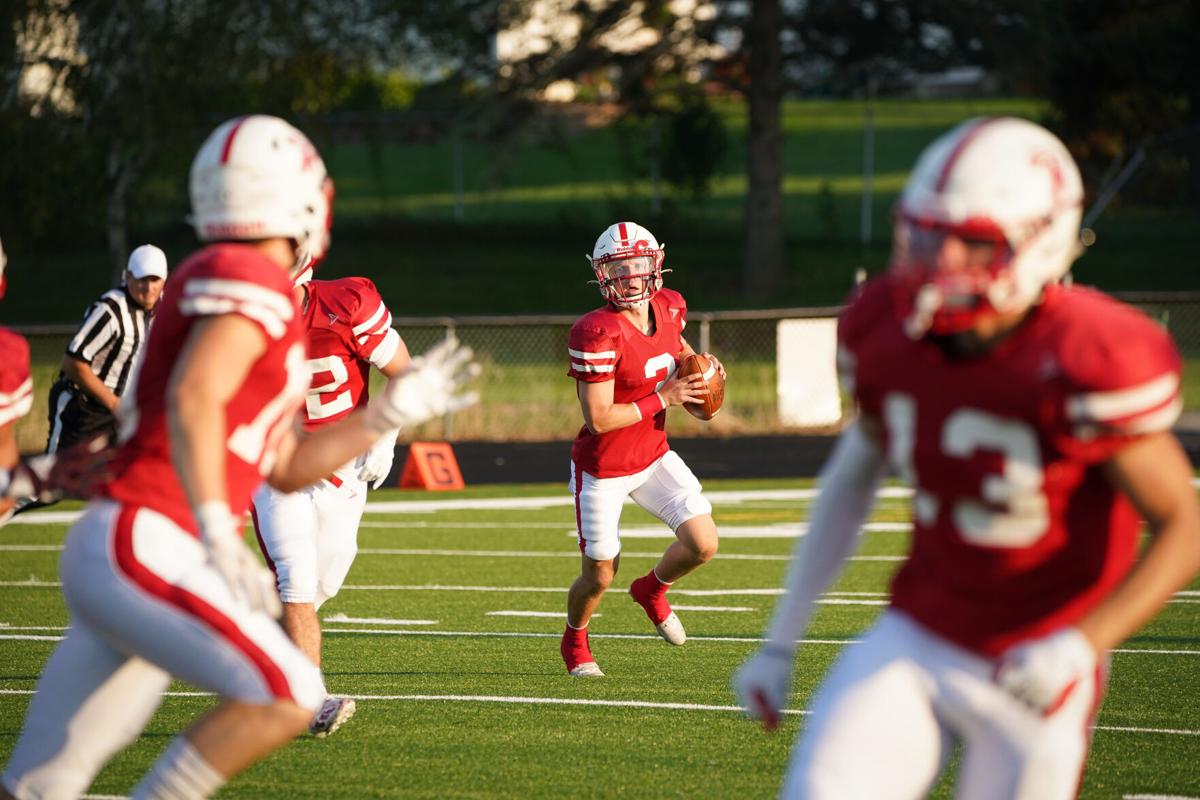 Jarrett Zibert rolls out of the pocket as he searches for an open receiver in Ripon’s 46-38 victory. 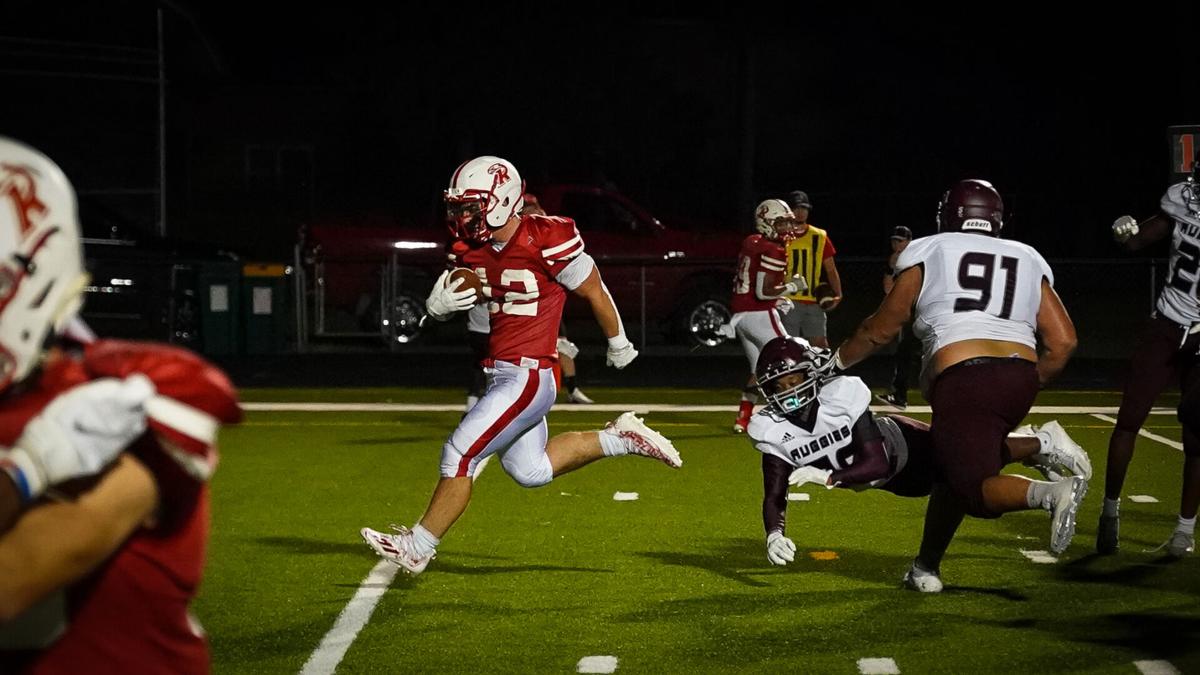 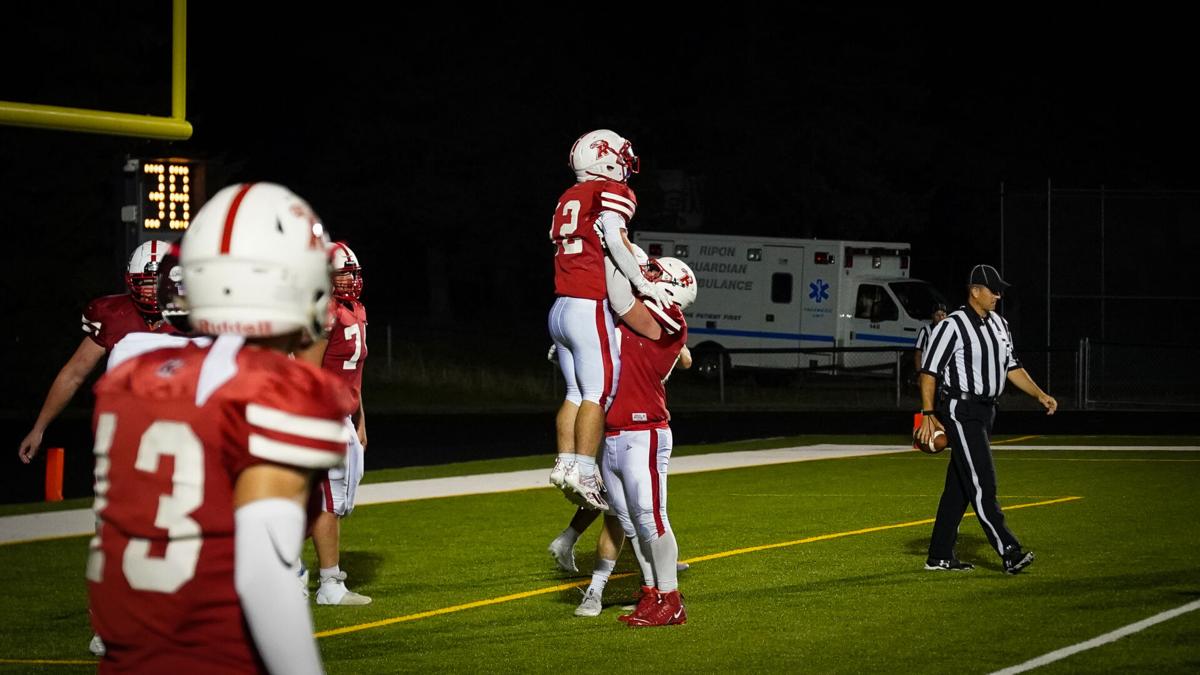 Connor Ramage is hoisted in the air after scoring a touchdown. 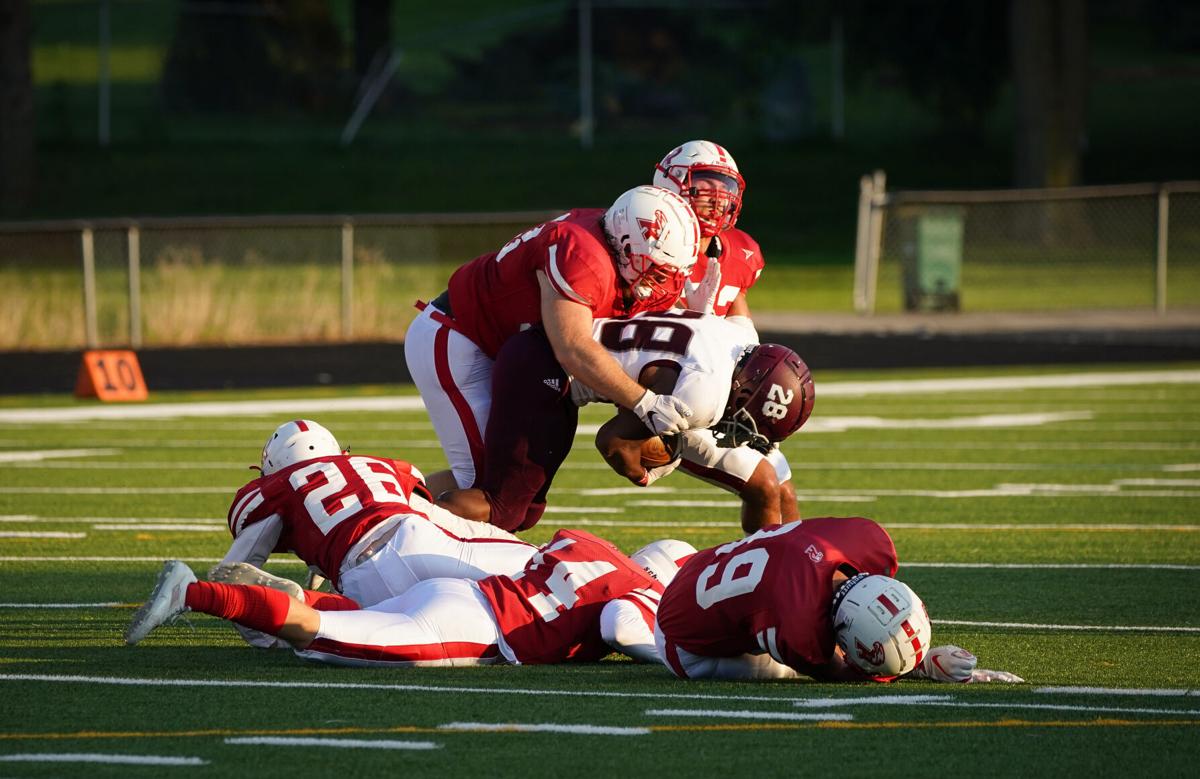 Liam Peterman tackles an Augsburg ball carrier as a number of Red Hawks swarm to the ball. 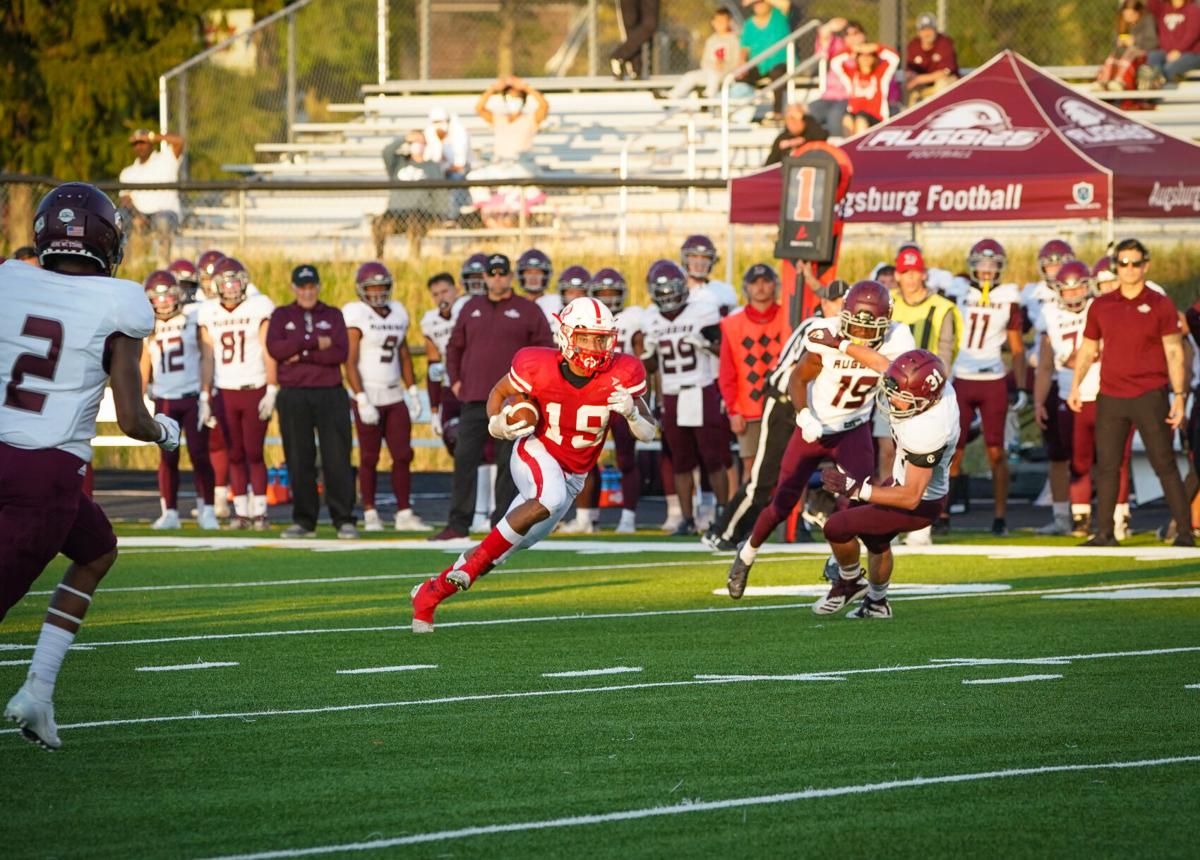 Kaipo Magsayo picks up yards after the catch as a pair of Augsburg defenders run into each other. 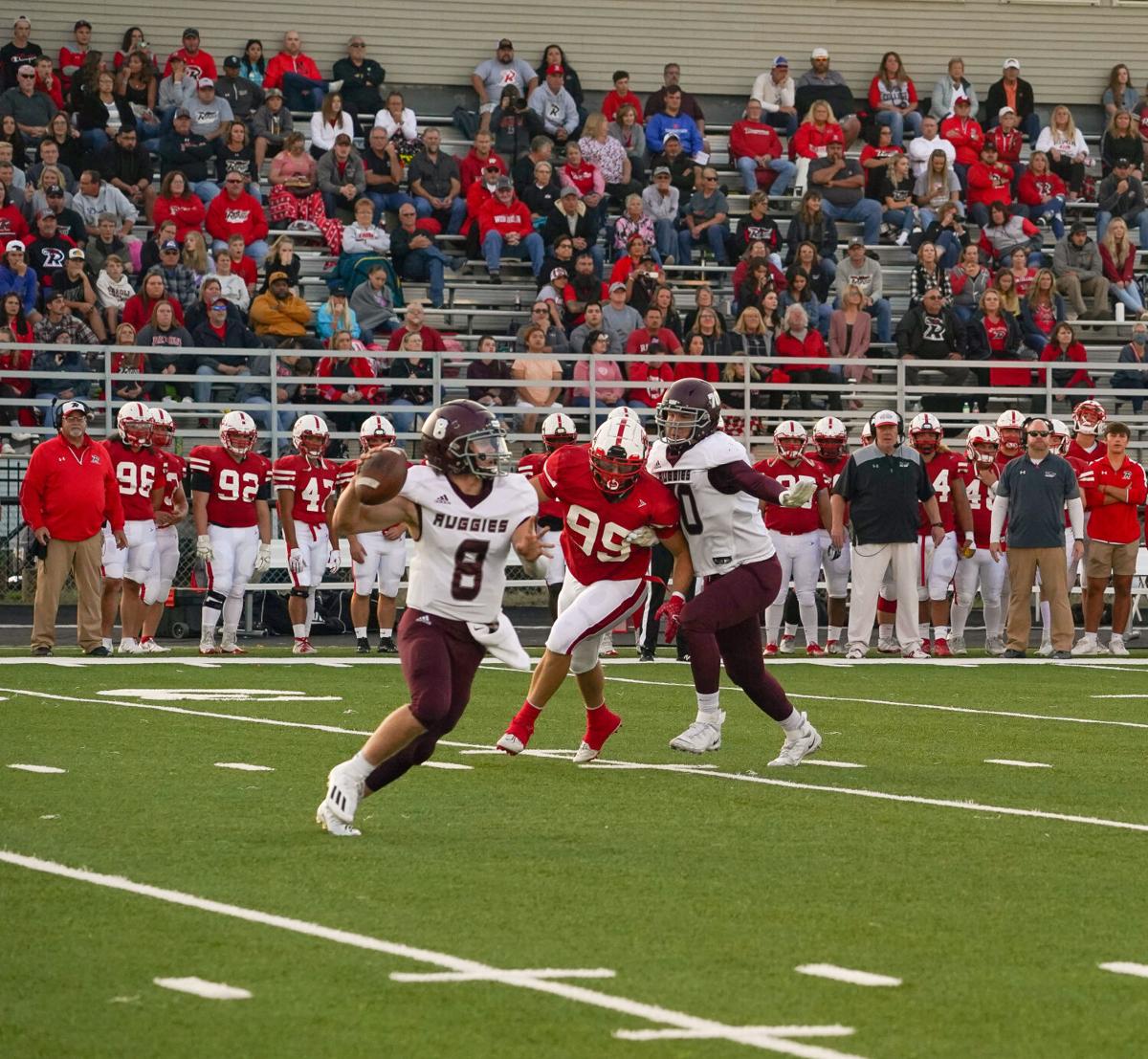 Dylon Ross, middle, pursues the quarterback. He finished with a sack. 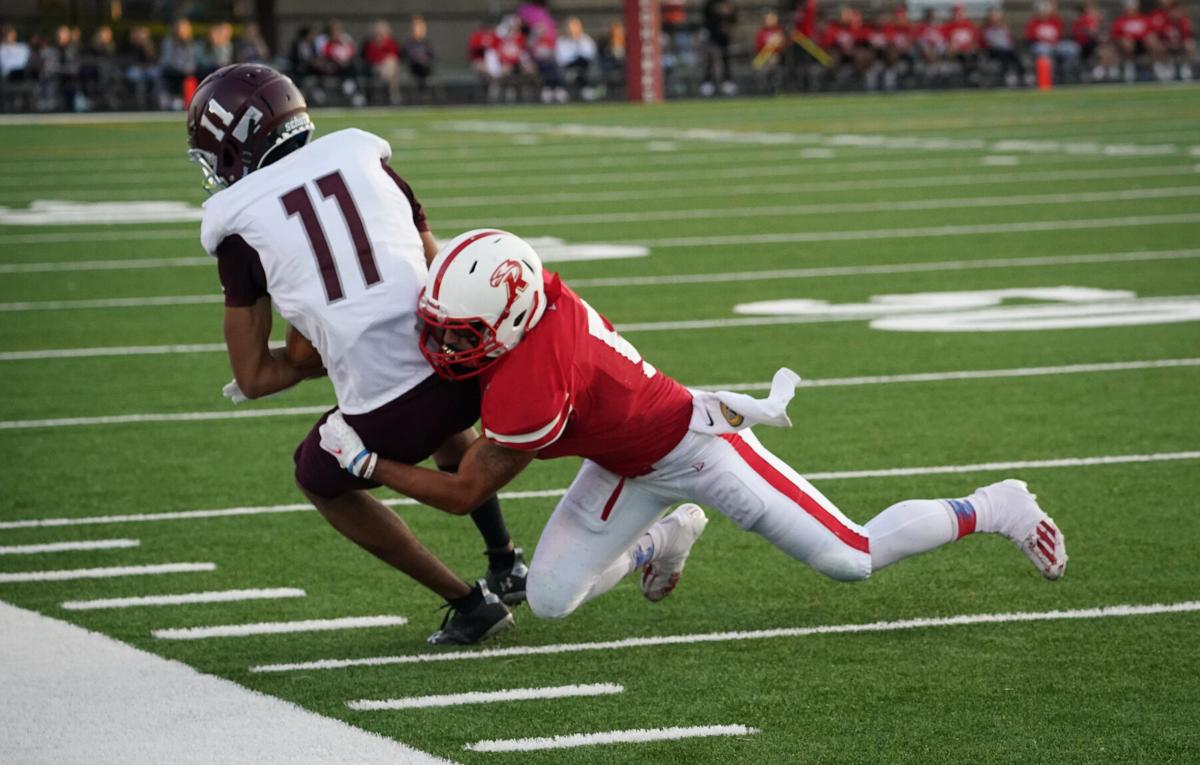 Dino Herrera tackles an Augsburg ball carrier near the sideline.

Connor Ramage gallops his way into the end zone for one of his school record-tying six touchdown runs.

Jarrett Zibert rolls out of the pocket as he searches for an open receiver in Ripon’s 46-38 victory.

Connor Ramage is hoisted in the air after scoring a touchdown.

Liam Peterman tackles an Augsburg ball carrier as a number of Red Hawks swarm to the ball.

Kaipo Magsayo picks up yards after the catch as a pair of Augsburg defenders run into each other.

Dylon Ross, middle, pursues the quarterback. He finished with a sack.

Dino Herrera tackles an Augsburg ball carrier near the sideline.

Augsburg answered with a four-play, 70-yard scoring drive early in the second quarter and added another touchdown after an Erik Flores’ 23-yard field goal to cut Ripon’s lead to 16-12 with four minutes left.

But Ramage found the end zone again before the half — this time from six yards out — to put the Red Hawks out in front 23-12 entering halftime.

The Auggies didn’t go away easily in the second half, however, as they scored three of the first four touchdowns. Two of those touchdowns came as a result of special team mistakes by Ripon as Augsburg returned a kick 88 yards for a touchdown and then recovered a fumble on the ensuing kickoff and turned it into a touchdown six plays later to take a 31-30 lead with around seven minutes left in the third quarter.

“Those two plays really backed us into a corner and that allowed them to kind of take the lead,” Ernst said.

Ripon didn’t let the squandered lead bother it as it rallied off 16-straight points, which included touchdown runs of 6 and 7 yards from Ramage and a 27-yard field goal by Flores, to retake a 46-31 advantage.

“There was no panic, there was no finger pointing, it was ‘OK, let’s go get this. Let’s go do this,’” Ernst said. “Our guys were tremendously supportive of each other.”

The Ripon coach credited a lot of that to the Red Hawks’ strong leadership of their juniors and seniors.

“They’re really bringing our young guys along very well as to how we run things in this program,” he said. “The combination of great leadership, the attitude that we have on the team can take us a long way.”

Augsburg cut into the lead with a touchdown with a little less than two minutes remaining and had the ball with 44 seconds left and 90-yards to go to give itself a chance to tie the game, but Devin Smith picked off a pass at Ripon’s 20-yard line with around 10 seconds left to seal the 46-38 win for the Red Hawks.

The interception was one of three in the game for Ripon as Seth Lane and Zach Bunders also picked off passes. The Red Hawks added three sacks, with Dylon Ross and Daylin Smith recording solo sacks and Desmond Murphy and Paxton Walker teaming up for the third one. Bunders led Ripon with eight tackles.

The Red Hawks did give up quite a few yards through the air as Augsburg finished with 393 yards passing.

Ernst noted he found out after the game that the Auggies’ top-three receivers were all Division II transfers.

“We probably could have tightened things up a little bit more in the secondary, but we’re running a new [3-4] scheme ourselves and we’re still learning a little bit on how to get it done right,” Ernst said. “I thought our kids played pretty well for the most part ... We’re going to clean some things up.”

The Red Hawks, meanwhile, didn’t turn the ball over once offensively and didn’t give up any sacks. Ernst attributed a lot of the success to the game plan that the offensive coaches Jake Marshall, Rick Coles, Mike Schmitt and Mark Madigan drew up and the job they did in getting their position groups ready to play.

The Ripon head coach also noted there was excitement among the team and in the stands as the Red Hawks played their first night game in many years and were coming off a lost season due to COVID-19.

“I just can’t thank our students enough for their attendance and their participation and their excitement,” Ernst said. “We had a band there and they were great … It was a huge crowd and the atmosphere was really exciting and our kids fed off of that.”

Ripon finished the game with 570 yards of total offense, which was split fairly evenly between rushing yards (293) and passing yards (277) as the team transitioned to more of a spread offense this year.

A big part of that success for the Red Hawks, outside of Ramage and the offensive line, was the play of senior quarterback Madigan and freshman signal caller Jarrett Zibert. They combined to complete 20 of 31 passes for 277 yards and added 65 yards rushing on 12 attempts, while not turning the ball over.

“Both young men had played very well in the preseason and so we certainly felt that giving them both an opportunity would be the right thing and it was working well,” Ernst said of the decision to play both.

While Madigan and Zibert were alternating possessions early in the game, Madigan suffered a minor ankle injury in the second quarter that sidelined him the rest of the game and gave Ziebert the job.

“Cormac I thought was playing well,” Ernst said, noting the injury shouldn’t keep him out for a long time. “Jarrett then came in and played extremely well. He took us home. He kept the offense rolling, made some big plays, showed a lot of mobility that we thought he had, but he really did some good things.”

A recipient of the strong play from Madigan and Ziebert was Kaipo Magsayo as the junior finished with 10 catches for 130 yards. Parker Campana added two catches for 54 yards, while Folbrecht hauled in two catches for 37 yards and Ulrich secured four passes for 29 yards. Ramage and Tiegan Bothum caught the other two pasess for Ripon, which went for 21 and six yards, respectively.

Ripon will try to build off what it accomplished in its season opener Saturday afternoon, when it kicks off the Midwest Conference season on the road against the Knox College Prairie Fire. Kick off is set for 1 p.m.

Ernst noted that he doesn’t know much about Knox as it had its game last weekend against Westminister College (Mo.) canceled due to COVID issues within the Westminister program. The Prairie Fire also did not play in any spring games last year, meaning the last time it was on the field was back in 2019.

Ernst noted the Red Hawks are not going to worry too much about what Knox does or doesn’t do, but rather what they do and that they improve upon last week’s game against Augsburg.