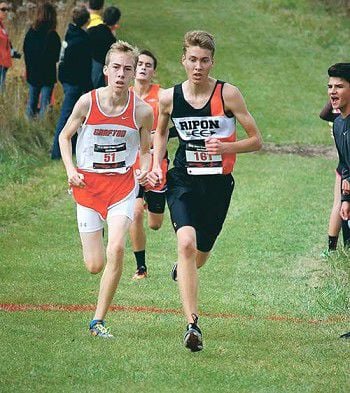 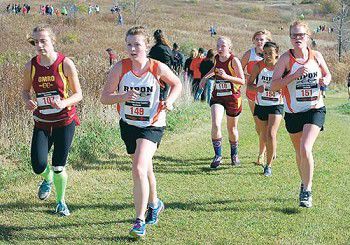 Running for Ripon at the Cedar Grove-Belgium Division 2 Sectional Meet are, from left, Hannah Coziahr (149), Christina Sutula (154) and Ashley Johnson (151).

Running for Ripon at the Cedar Grove-Belgium Division 2 Sectional Meet are, from left, Hannah Coziahr (149), Christina Sutula (154) and Ashley Johnson (151).

Ripon High School cross country coach Chris Gatzke coined that term for Seth Zimdars and his brothers after their history of improving their junior year and breaking out their senior season.

The senior was the Tigers’ lone qualifier for the state championship meet, which will take place Saturday in Wisconsin Rapids. He is their first representative in the last three years, after 19 years of sending at least one.

Seth finished fifth overall and fourth among runners who didn’t qualify as a member of a team with a time of 17 minutes, 11 seconds.

“He ran a very smart, strong race,” Gatzke said. “Having the experience from last year and how he was able to run the races all through the year really helped him to be able to succeed there.”

His time of 17:11 was almost 2 minutes faster than what he ran at the same course last year. It is just one example of the strides he has made in his time with the Tigers.

“Seth’s first year, he was averaging 20-plus minutes per race and this year his average time is around 17:20,” Gatzke said. “So he’s improved immensely year after year for the four years that he’s been in the program ...”

The senior’s performance at sectionals was the highlight of the meet for the Tigers, for whom the boys finish sixth out of 14 teams and the girls place 12 out of 14.

Read the full story, which includes full results for both the boys and the girls teams, in the Oct. 29, 2015 edition of the Ripon Commonwealth Press.