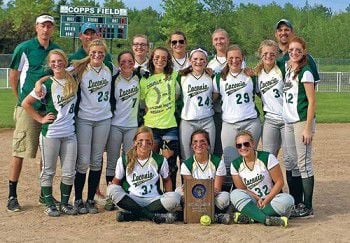 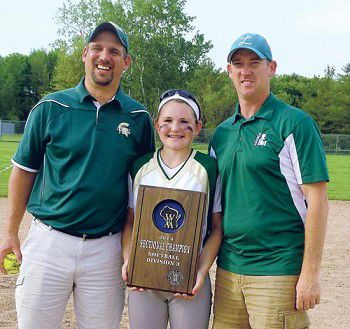 The Laconia High School softball team is no stranger to success. Since 2009, the squad has been a force in the WIAA playoffs.

Last spring, the team even made it to within one game of the state tournament. That was with a senior pitcher, though, and an experienced squad: six senior starters graduated last spring.

But don’t blame this year’s girls for being green.

“I’m fully aware of how young we are,” laughed Scott Ritzema, coach of the Spartan softball team.

Maybe none more so than one of the youngest on the squad.

Freshman pitcher Kayla Schwebke may be too young to own a driver’s license, but there is no doubt she is the one who has driven the Spartans within throwing distance of a state title.

When Laconia takes the field Friday at 1:30 p.m. in Madison, the squad’s fate will rest heavily on the arm of this girl, whose perfect game in sectionals helped punch the team’s ticket to the big tournament.

“The strength is my pitcher. Kayla Schwebke does an excellent job of keeping her composure in every situation,” Ritzema said. “She’s a very even-keel type of player, where she handles situations very well, and she has been able to locate her pitches very well. She plays very maturely for her age.”

How good has she been? So good that Laconia’s excellent defense theoretically could take lengthy naps during the playoffs and not miss a thing.

“We’ve got a really good defense behind her, [but] in the second round of regionals — we had a first-round bye — she struck out 17 out of 18 batters,” Ritzema said of throwing a perfect game. “In the regional final, she gave up three hits; and in the sectional semifinal, she gave up one hit.”

During that stretch, she’s issued just one walk, too.

Laconia’s coach had an idea she’d be a force.

Read the full story in the June 12, 2014 edition of the Ripon Commonwealth Press.