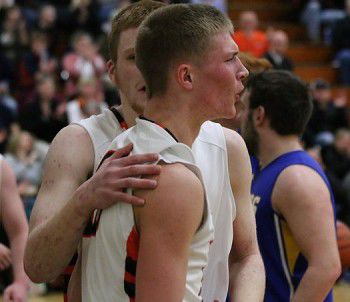 Luke Loewe reacts after making a basket while getting fouled in the first quarter of Ripon's 62-32 win over Campbellsport tonight (Friday). He completed the three-point play to give the Tigers a 9-3 lead — which was part of a 24-4 run. 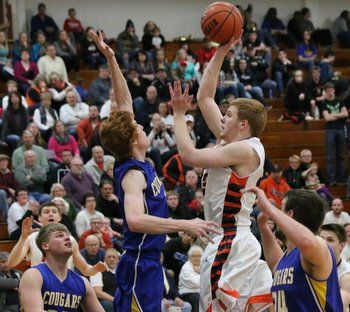 Tyler Pick releases a jumper in the first quarter. He made the basket and finished with a career-high eight points.

Luke Loewe reacts after making a basket while getting fouled in the first quarter of Ripon's 62-32 win over Campbellsport tonight (Friday). He completed the three-point play to give the Tigers a 9-3 lead — which was part of a 24-4 run.

Tyler Pick releases a jumper in the first quarter. He made the basket and finished with a career-high eight points.

The rematch with Laconia for the regional title is set.

The Ripon High School boys’ basketball team took care of business tonight (Friday) against Campellsport, using a 24-4 first-half run to cruise to a 62-32 victory at home.

With the win, the Tigers will host the Spartans, who defeated Winnebago Lutheran Academy 44-27 in their regional semifinal game, tomorrow (Saturday).

That game is scheduled to tip off at 7 p.m., with tickets going on sale and the gym opening up an hour before.

Ripon (20-3 overall) has won its last four games against Laconia (21-3 overall), but all four have been decided by four points or less — including a dramatic 43-42 buzzer-beating win last year in the regional championship game.

It also defeated the Spartans 58-54 earlier this season at the Kress Events Center in Green Bay.

“You know you’re going to get good teams any time you when and you move on in the tournament and that’s one really good team,” Ripon head coach Dean Vander Plas said. “They got a really special player in [Brett] Wittchow and they have a lot to go with him. We’ve had to play them in a lot of tough games in the last two years and this one is going to be no different. We’re going to have to figure out how to keep them out of the lane and off the glass. Justin Johnson is the wild card for us. He hurt us on Green Bay where he got all over the glass and got some easy buckets for him.”

The game will mark the first time in the last four contests that the teams will play in the Ripon gymnasium.

“Yeah, maybe we should go play them somewhere else,” Vander Plas said joking. “I’m just really excited for our kids. They wanted to earn the right to be able to play a game like this at home. It’s been a long time since we’ve had a regional final at home … It’s nice just playing in our confines. I love our fans. I love the way the community supports this team. It’s a really fun gym when it’s full.”

The Tigers took advantage of home-cooking tonight (Friday) against Campbellsport.

After scoring just three points in the first four minutes, they went on a 24-4 run to take a 27-7. They led by at least 17 points the rest of the way, including by as many as 31.

“We got great looks,” Vander Plas said. “I thought the looks we got early were good, too, but we were playing a little fast and didn’t hit them. And then we upped the pressure on defense and tried to make them play as fast as we were and that really led to some decent looks for us in transition, some decent looks in the half-court and then, I think, we bothered them a little bit. They started to throw the ball around a little bit and we got a chance to build the lead and our guys took advantage of it.”

Another area Ripon excelled was defending the 3-point shot.

It allowed the Cougars to shoot just 4 of 18 from long range and gave up only one 3-pointer in the first half.

Entering the game, Campbellsport’s ability to knock down 3-pointers was an area Vander Plas was concerned about.

“We knew we had to close out well,” Vander Plas said. “I thought the kids stayed discipline for the most part all night. In the second half, they started to shoot a little better, but it wasn’t our defense that was poor. They made some shots. But I really loved the way we were closing out and staying in front of the kids. And then we only let them have one shot … They only had four rebounds - one offensive - and that gives us a chance to be successful.”

Luke Loewe led the way with a game-high 21 points, eight of which came in the first quarter, while Riley Haas and Eddie Muench added 11 and nine points, respectively.

Ripon also got eight points each from Tyler Pick and Hunter Merrill, which is a career-high for both.

“We had good balance tonight,” Vander Plas said. “I thought Tyler Pick and Hunter Merrill giving us eight points each out of transition and in different ways helps you tremendously. Eddie, Luke and Riley really did a great job of understanding what we could get. Luke gave us a great start and Luke played one heck of a game, defensively and offensively, and we were in a lot of good looks because of Luke.”