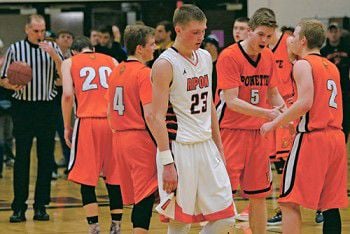 Luke Loewe bows his head in dejection as Poynette players celebrate behind him in the final minute of Ripon’s 57-33 sectional semifinal loss. 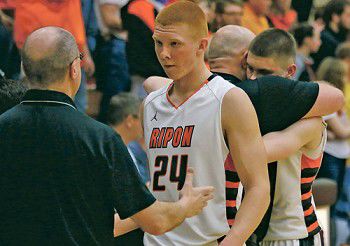 Luke Loewe bows his head in dejection as Poynette players celebrate behind him in the final minute of Ripon’s 57-33 sectional semifinal loss.

Trailing 11-0 with Poynette on the free-throw line, the Tigers couldn’t corral the rebound and appeared to tip it into the Pumas’ basket.

“From my view, I don’t know who tipped it in,” Ripon head coach Dean Vander Plas said. “I know the guy was over Tyler Pick’s back as he’s boxing him out.”

The basket was a sign of things to come.

Despite neither calls, nor bounces, going their way, the Tigers fought hard, but could never overcome the start as they fell 57-33 in West Bend.

They did cut the deficit to as few as six points early in the third quarter, but the Pumas answered with a 9-0 run to put the game away.

With the loss, Ripon finishes its season 21-4 — which marks the second-straight season it has finished with more than 20 wins.

“Other than that start to the third quarter, we just really didn’t get any string of quality plays in a row and then they did a good job of taking away Luke [Loewe] and Eddie [Muench] and I couldn’t find a way to get them clean looks and clean catches,” Vander Plas said. “As a coach, you have to figure out a way to do that for them and we didn’t.”

Read the full story, which includes information on the four seniors who played their final high school game, in the March 19. 2015 edition of the Ripon Commonwealth Press.