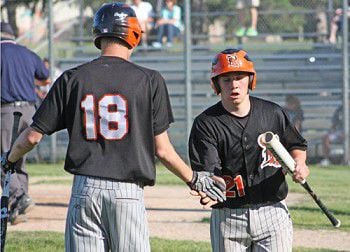 Hunter Merrill, right, is congratulated by Carter Meyer after scoring a run in the fifth inning of Ripon's 4-1 regional semifinal victory tonight (Wednesday) over Wisconsin Dells. 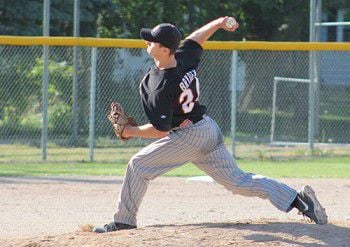 Payton Bryden prepares to throw a pitch. He recorded a complete-game performance, allowing only three hits and an unearned run. Bryden also went 3 for 3 at the plate.

Hunter Merrill, right, is congratulated by Carter Meyer after scoring a run in the fifth inning of Ripon's 4-1 regional semifinal victory tonight (Wednesday) over Wisconsin Dells.

Payton Bryden prepares to throw a pitch. He recorded a complete-game performance, allowing only three hits and an unearned run. Bryden also went 3 for 3 at the plate.

It wasn’t about to let it happen again.

After losing to Wisconsin Dells in last year’s regional title game in walk-off fashion on three-consecutive two-out hits, the Tigers gave the Chiefs a dose of their own medicine tonight (Wednesday).

They scored two runs in the fourth inning on four-straight two-out hits to break a 1-1 tie.

Ripon never looked back en route to a 4-1 regional semifinal win over the Dells at Barlow Park.

“Our approach at the plate was strong with two extra-base hits to go along with our 12 total hits,” Ripon head coach Dan Jonas said. “I loved our energy and its off to the regional final on Friday.”

The game started off a bit rocky for the Tigers as they fell behind 1-0 in the top of the first inning.

But they wasted no time answering as they got the run back in their half of the inning.

The score remained tied after that until the fourth inning.

Payton Bryden began the inning with a single and was replaced by courtesy runner Joe Sharp.

After numerous pick-off attempts by the Dells pitcher, Sharp stole second base and advanced to third on a fielder’s choice.

With two outs, Jared Block singled in the game-winning run.

Following two more two-out singles by Taylor Worthington and Austen Nissen to load the bases, Ben Pulvermacher drove in another run on an RBI single.

The Tigers tacked on another run in the bottom of the fifth on a Bryden RBI single. He scored Hunter Merrill, who doubled to begin the inning and advanced to third on a fielder’s choice ground-out.

That was more than enough run support for Bryden on the mound.

The senior pitched a complete game, allowing only three hits.

He did get in a little bit of trouble in the sixth and seventh inning, but was able to work out of it.

Among the big plays was a pick-off at second base with two on and one out in the sixth. The Chiefs would add a single after that, but couldn’t score a run.

Bryden also induced a fly out to the potential game-tying runner in the seventh inning to end the game.

“He got a little tired at the end, walking two batters [in the seventh], but finished the game throwing a total of 102 pitches,” Jonas said.

Bryden also led the Tigers at the plate as he was 3 for 3 with the RBI in the fifth inning.

Worthington and Nissen added 2-for-3 days, while Ben Pulvermacher was 2 for 4 with a run scored.

With the victory, Ripon will host Westfield Area for the regional championship Friday.

Much like the rematch against Wisconsin Dells, the Tigers and Pioneers are no stranger to each other.

The two teams met in the regional semifinals last year, with Ripon coming away with a 1-0 win.

Friday's game is scheduled to get underway at 4:30 p.m.