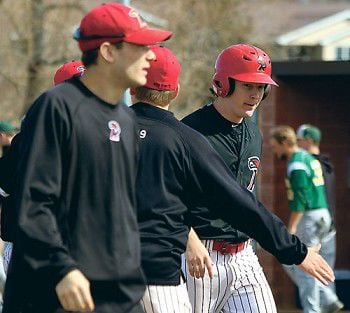 Jake Reinke, right, is congratulated by teammates after winning the first game of a four-game series on a walk-off, infield single. 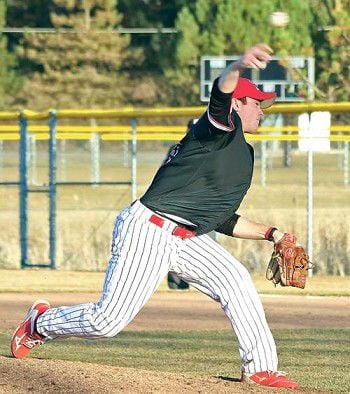 Marshall Zahn delivers a pitch against St. Norbert. He allowed just one run in nine innings.

Jake Reinke, right, is congratulated by teammates after winning the first game of a four-game series on a walk-off, infield single.

Marshall Zahn delivers a pitch against St. Norbert. He allowed just one run in nine innings.

Sometimes, you don’t have to hit the ball far to make an impact.

That was the case for the Ripon College baseball team and Jake Reinke last week Thursday.

With a runner on third base and two outs in the ninth inning of a tied game, Reinke pounded the ball into the ground and it rolled down the third-base line for an infield single.

The hit did more than just win the first game of a home doubleheader against rival St. Norbert.

“It’s huge because it sets the tone,” Ripon head coach Eric Cruise said. “To win the first game of any doubleheader sets the tone for the next game because you just have that emotional edge. And then to come back from blowing the lead the way we did ... shows resiliency. After coming off that Florida trip, you could sit there and be like, ‘Oh, here we go again,’ but the guys battled.”

The Red Hawks used that momentum to win the second game 6-1. They split a road doubleheader with the Green Knights two days later, losing 5-0 and winning 6-2.

It marks the first time since 2011 that Ripon has won the season series against St. Norbert.

The two teams have split the series the last two years and the Green Knights swept it in 2012.

With the wins, the Red Hawks (3-1 conference, 6-8 overall) also put themselves right where they want to be in conference play.

“It’s a great start to the conference season,” Cruise said. “The goal is to win every series, so you start off by winning the series against your rival ... if you win three out of four in all four conference series, you’re 12-4 and should be in position to be the No. 1 seed.”

Read the full story, which includes information on a strong pitching performance by senior Marshall Zahn, in the April 9, 2015 edition of the Ripon Commonwealth Press.