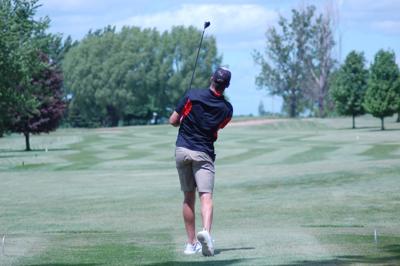 After last week Wednesday’s East Central Conference meet, Ripon High School head golf coach Rick Kelm believed Sam Yeoman’s best golf was still ahead of him and that he might see a return to his capabilities in regionals.

That’s exactly what happened. Yeomans led the Tigers Tuesday with a fifth-place finish out of 39 golfers to help them qualify for sectionals for the first time since 2012.

He shot a five-over-par 41 on both the front and back nine to finish with a 10-over-par 82 at Wild Rock Golf Course in Wisconsin Dells. He was just four strokes back of second place, while the winner, Winneconne’s Winston Knobloch, shot a two-under-par 74 to win the regional title.

“I’m going to go out on a limb and say I think his best round is still ahead of him,” Kelm said of Yeomans. “I think he could turn in a great round next week also. [If] the rest of the team can cut some strokes and we can be in even better shape at the sectional. I’m very happy that he put together a little better round; it could have been even a little better than what it was.”

While Yeomans led the way, he was far from the only reason the Tigers were able to advance. Ripon finished as the fourth and final team qualifier with a 364, just three strokes ahead of host Wisconsin Dells.

Drew Kastenschmidt helped pick up the slack after Cole Burdick had a rough first nine holes as Kastenschmidt finished tied for 13th with a 17-over-par 49.

“Drew coming up like he did today was huge for us to make it on; to be that close to make it through, we needed that,” Kelm said of the junior. “When you’re in team sport, you have to pick each other up.”

While Burdick struggled on the front-nine, shooting a 20-over-par 56, he trimmed off eight strokes in the back-nine to help Ripon advance as a team. He finished 28th with a 32-over-par 104.

“As poorly as things were going for Cole for the stretch in the front nine, he had to have the nine that he did in the back for us to make it,” Kelm said.

Ripon also received a solid performance from Riley Brooks, who has been one of its most consistent golfers all season. The sophomore finished tied for 13th place with a 17-over-par 89.

Ripon now will turn its attention to sectionals, where the top-two teams and top-three individuals not from qualifying teams will advance to state.

The sectional will take place Tuesday at Waushara Country Club in Wautoma, a course Kelm believes plays well for the Ripon.

He noted the Tigers are going to have to be on, but that they have some players that are capable of advancing if they put in their best round. The meet begins at 9 a.m.